This site contains affiliate links, which means I may earn referral revenue if you make a purchase through these links without any extra cost to you. It helps keep this site online. Thank you for your support.

Those who go to Botswana on safari owe a debt of gratitude to the guides who drive them to see the animals, educate them in the various species’ behaviors, interpret the actions, teach basic tracking skills, maneuver their vehicles for the best camera angles, and keep them safe while they are doing it. 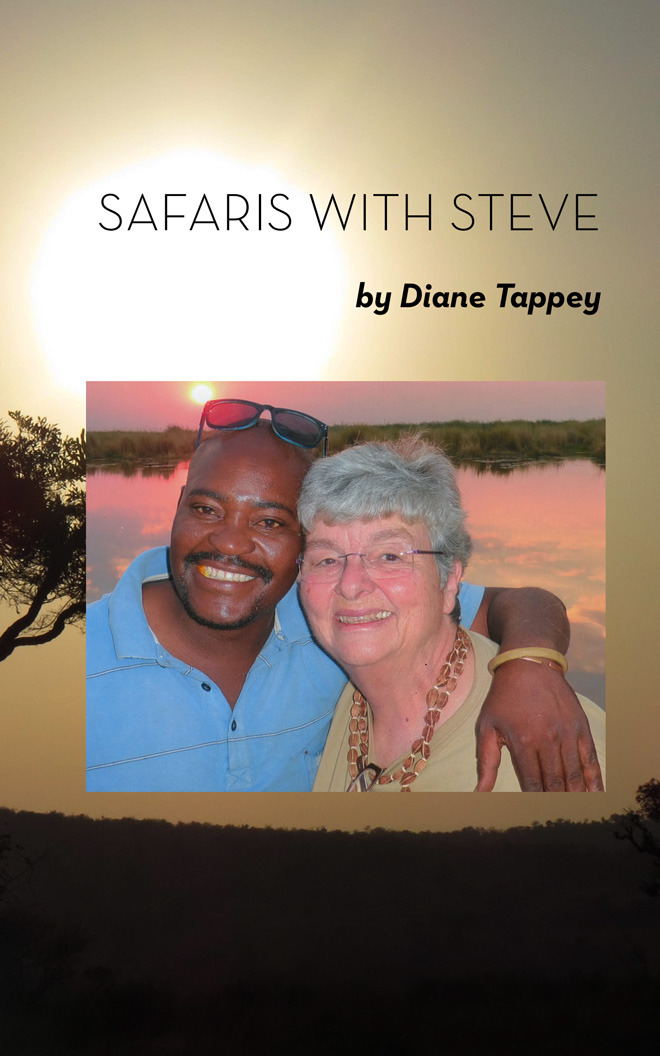 “Over the years, I’ve had many gifted guides who introduced me to the wonders of the Okavango Delta and the Kalahari Desert. All have given me amazing experiences, but none more than Steve Matija. This book is my song of praise and gratitude to him.”

It didn’t take long to find what the lions were calling about. A large herd of buffaloes were munching the last bits of grass before they stopped for the night. As we pulled up, two buff-colored shadows leapt out from behind some brush. The buffaloes galloped in every direction to avoid the rushing lions. Several of the bulls turned to lower their heads and scoop their horns, warding off the attack. In a heartbeat, the lions faded back into the darkness. Surprise is their mode. They wouldn’t linger and give the buffaloes time to strengthen their defenses. No one would want to face a buffalo on the offense either. They are huge and notoriously unpredictable.

We drove on to see what else was out there. I was charmed by how different it was in the dark. Occasionally, our lights would pick up the eyes of impalas, settled in for a rest. We stopped next to a tree that had an owl perched on a branch, watching us as he waited for some small creature to make the mistake of moving into his sights. There wasn’t much of a moon, but the sky was so filled with stars, they looked like they were bumping into each other, jockeying for position in the firmament. It was all so amazingly peaceful.

Finally, we headed back toward camp. Steve pulled up next to the buffaloes for a last look before turning in. We crunched to a stop and suddenly, there was action just in front of us. Sand and dirt flew up into the air as several cows tried to dance away from the scuffle. Ten feet away, the two lions rushed in and grabbed a calf. The uproar was deafening. Cows and bulls bellowed and lions snarled and roared. There was so much dirt swirling around, I couldn’t see what was happening.

Then, next to our front left tire, three feet away from where I was sitting, a heavy body crashed to the ground. Dirt still swirled, but I could make out the calf thrashing on its side and calling for help. The lions pounced, searching for its throat to shut off its air supply. Suddenly, with a sound I’d never heard a cow make, the mother rushed in to save her baby. She used her horns like sabers, slashing at the marauders. Several of her sisters entered the fray. The lions each grabbed a mouthful of calf and pulled it up onto a termite mound next to our car. The mound gave them some coverage on one side. They intelligently thought they’d stand a better chance in this battle if they didn’t have to defend their rear.